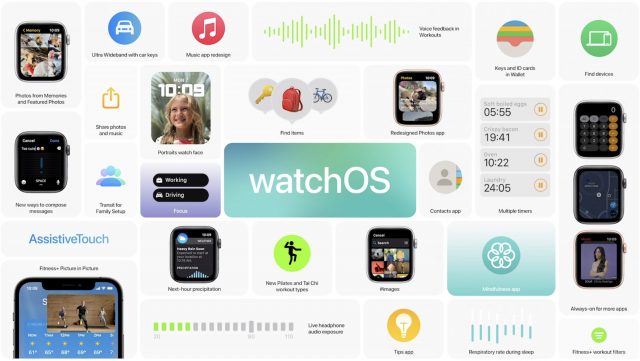 Apple’s WatchOS 8, unveiled at the Global Virtual Developer Conference, features a slew of improvements in health, communication, photos, home automation, and more. While perhaps overshadowed by other WWDC announcements, these collectively do a lot to move the Apple Watch forward.

Apple rolled out sleep tracking features in watchOS 7 last year (see “watchOS 7 introduces sleep tracking, handwashing detection, and more,” June 22, 2020), and builds on this theme with watchOS 8. In addition to tracking metrics like time asleep, heart rate, and blood oxygen, Apple Watch now monitors “sleep breathing rate,” the number of breaths per minute. The Apple Watch does this trick with its built-in accelerometer, and you can view the results in the Health app. You will receive an alert if there is something wrong with the sleep-breathing service.

To highlight the usefulness of mindfulness for mental health, Apple renamed the Breathe app to Mindfulness and added improved Breathe routines. New to the app are the Reflect routines which provide you with short pieces of text, such as “Remember a time when you felt a sense of calm recently. Bring that feeling into this moment. – intended to put you in a positive frame of mind. Breathe and Reflect sessions are enhanced with calming animations, although we suggest closing your eyes is more calming than holding your arm on your hips for a minute or more at a time to see the pretty graphics.

The Apple Watch is great for initiating a wide variety of workouts, and Apple has added two more: Tai Chi and Pilates. For those who are willing to pay for Apple Fitness +, there are new workouts with Jeanette Jenkins (no, we don’t know who she is, but we understand that she is popular) as well as playlists from workout of Lady Gaga, Jennifer Lopez, Keith Urban, and Alicia Keys.

The Apple Watch’s small screen doesn’t seem ideal for viewing photos, but Apple is making the most of it. Perhaps most notably, watchOS 8 includes a new Portraits watch face that turns portrait images of a friend or relative into an “immersive, multi-layered effect”. When you spin the digital crown, it looks a bit like those 3D animated photos that keep popping up in your Facebook feed (see “Google and Facebook use iPhone portrait mode for fun effects”, December 13, 2018).

Apple has also redesigned the Photos app with Memories Highlights and Featured Photos, along with a cool Mosaic layout. Plus, if you can navigate the small screen, you can share photos through Messages and Mail. It’s hard to be too excited about these changes, considering that every Apple Watch owner has an iPhone that will be a much more efficient platform for interacting with photos.

Apple Watch offers several ways to send short messages: Scribble, voice dictation, and emojis. Now, Apple lets you use the digital crown to position the cursor when editing voice-dictated messages. It’s better than nothing, but we really don’t see anyone using it, except perhaps to correct a particularly egregious dictation failure.

Additionally, in a nod to the social age, Messages in watchOS 8 now provides a library of trending animated GIFs to express a sentiment or opinion (like a #facepalm) with a single moving image instead of a static emoji.

A redesigned Home app in watchOS 8 gives HomeKit users more options. If you have security cameras installed, you can see who is at the door or hiding in your driveway right on your wrist. An Intercom feature lets you broadcast verbal messages to HomePods and other devices throughout your home or in individual rooms. Finally, the new Home app shows status symbols for your devices, much like Home does in iOS 14, and watchOS 8 suggests scenes for you based on the time of day.

It’s great to see Apple making HomeKit devices, scenes, and automations more accessible, although in our experience the HomePod is the killer device for working with home automation.